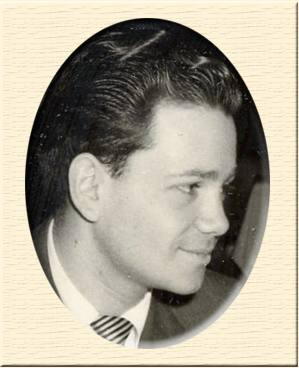 Jerry Ross wrote the musical scores for two of the most popular and enduring musicals in Broadway Theater, “The Pajama Game” and “Damn Yankees,” two shows which personify the innocence and exuberance of the Golden Age of Broadway.

Jerry Ross was born Jerold Rosenberg on March 9, 1926, to Russian immigrant parents, Lena and Jacob Rosenberg, in the East Bronx, New York City. As a child and young teen, he was the “hottest young property on the Jewish stage,” singing and acting professionally and billed as the “Boy Star” in Yiddish stage and movie productions. An ongoing bronchial condition, however, ended his performing career while he was still in high school.

Fortunately, he also began writing songs while in high school, although he had no formal training in music. Subsequently he studied at New York University under Rudolph Schramm. A fortuitous introduction to Eddie Fisher led to further introductions to music publishers at the hub of songwriting activity, the famed Brill Building. Fisher recorded Ross’ “The Newspaper Song,” which garnered early attention for both of them.

After penning several well-received songs, some in collaboration with Buddy Kaye and other Brill Building alumni, Ross met Richard Adler in 1950. They decided to team their talents, writing songs and special material (mainly for TV and nightclub acts). They had published several songs together when they attracted the attention of writer/publisher Frank Loesser and became his protégés. By 1953, their song "Rags to Riches" rocketed to number 1 on the charts, becoming a long-standing smash hit, recorded by Tony Bennett.

Ross began his career in the Broadway Theater with “John Murray Anderson’s Almanac,” a revue for which he and Adler wrote most of the songs (resulting in recordings of “Acorn in the Meadow” by Harry Belafonte and “Fini” by Polly Bergen). In 1954, after several auditions and Loesser’s recommendation, George Abbott contracted this promising young songwriting duo to write the score for a new musical about union/management relations at a pajama factory. “The Pajama Game” opened to rave reviews, winning the coveted Tony Award for best score, as well as the Donaldson Award and the Variety Drama Critics Award. Songs from the show included "Hernando’s Hideaway" and "Hey There" (a hit for Rosemary Clooney), both of which also topped the Hit Parade of popular songs, capturing the number one and two spots on the music charts and setting a precedent in music business history. Other songs from Pajama Game include the famed Bob Fosse dance number “Steam Heat,” as well as “Small Talk,” and “Seven And A Half Cents.”

A year later, in May 1955, the musical "Damn Yankees" played to equal excitement and success. This baseball tale with a Faustian theme once again won Ross the Tony Award, the Donaldson Award, and the Variety Drama Critics Award, plus cross-over recording hits for "You've Gotta Have Heart" (recorded by a more well-established Fisher, among many others) and "Whatever Lola Wants, Lola Gets." Both shows ran on Broadway for over 1000 performances.

Successful films were made of both musicals, although Ross did not get to see them realized.

He died from complications related to the lung disease bronchiectisis on November 11th, 1955. He was 29.

Pajama Game and  Damn Yankees were the top two shows running on Broadway at that time. Jerry Ross wrote more than 250 popular American songs. His untimely death at such a young age cut short a creative force that was sure to be as popular and enduring as his songs.

Jerry Ross was admitted posthumously to the Songwriter’s Hall of Fame in 1982. His wife, Judy, and daughter, Janie, accepted the award in his honor.

Recordings of his songs have sold many millions of copies, and his shows are continually performed and enjoyed, from first-class to first-grade productions!